Avoid a collision with a wild animal on the road 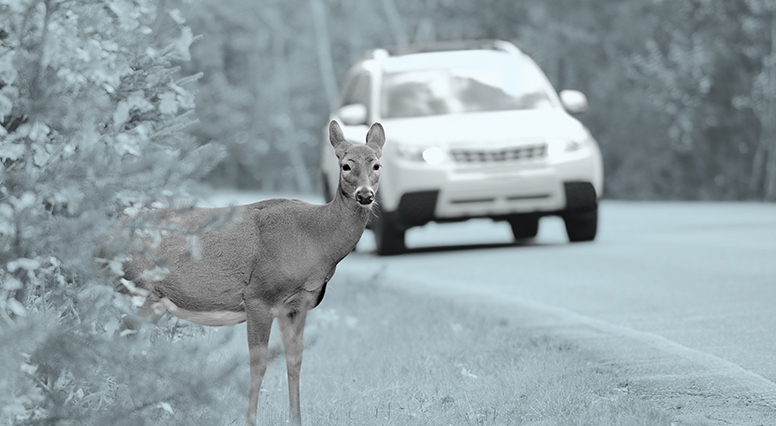 Follow our tips to avoid a collision with a wild animal while driving your vehicle on the road. Make sure you have the right coverage.

According to the government of Quebec, there are over 7,500 car accidents involving large animals in Quebec every year.

Collisions with deer are at the top of the list, followed by moose, caribou and black bears.

Here are a few tips for lowering your risk of a collision and on what to do you do encounter an animal in the road.

Be an attentive driver

An animal can cross the road at any time, even when you’re not expecting it. Here are a few tips to help you avoid a collision:

Did you know that you can install ultrasonic whistles on your car so that animals hear you coming? These whistles make a sound that’s too high for humans to hear and can reduce the risk of a collision with an animal.

What if you can’t avoid hitting the animal?

There are times when you may not be able to avoid hitting an animal. Don’t make any sudden movements as this can cause a more dangerous collision. You could, for example, risk colliding with cars in the oncoming lane.

What to do if there is an animal on the road in front of you:

Report the collision to the applicable authorities

An animal in the road can represent a danger to other drivers. That’s why it’s important to report it.

Some animals must be reported to wildlife protection even if they weigh less than 25 kg, including black bears, moose and coyotes. Check the Regulation respecting animals that must be declared for the full list.

What to do in case of a collision with a pet

If you hit a pet with your vehicle, it’s important to stay at the scene of the accident. If the owner is not present at the scene, report the accident to the nearest police station.

Barriers installed on some roads

The government has taken some measures to prevent collisions with animals on the roads.

For example, in the past few years, the government has installed fences along many roads to prevent animals from crossing.

Other techniques have also been used including clearing forests around roads and creating salt ponds.

Contact your insurance company if your vehicle is damaged

If you have a collision with an animal, contact your insurance company as soon as possible. Depending on the coverage you have with your car insurance policy, you could receive compensation for damages to your vehicle.

We hope you found these tips helpful. For more, check out our advice on how to reduce the risk of a car accident.

Whether you own or lease your vehicle, one of our advisors can help you choose insurance coverage to fit your needs.