Earthquake – How to protect yourself 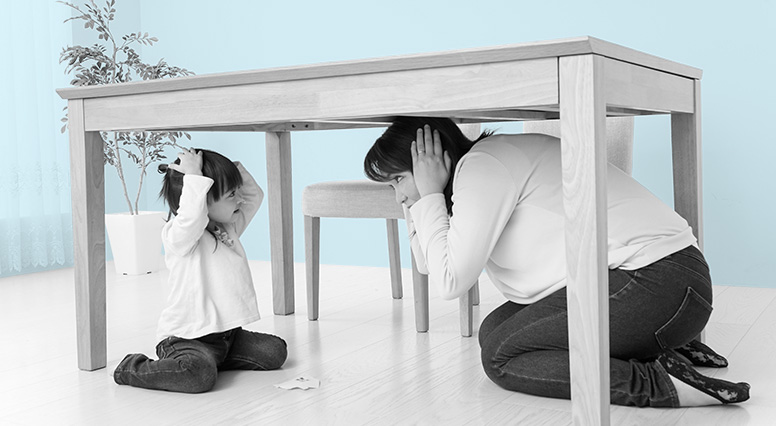 Would you be protected if there was an earthquake in your area?

Did you know that every year, an average of 400 earthquakes are felt in eastern Canada? And Quebec is not immune from this type of natural disaster. Luckily, these earthquakes are usually weak in intensity and, in most cases, are not felt. However, it’s important to remember that we are not immune from major seismic events. Think about the 5.9 magnitude earthquake in 1988 that surprised the entire Saguenay region and was felt across most of the province.

Here is some useful information that will help you be well prepared in case of an earthquake.

Three things to do in an earthquake
During an earthquake, it’s rarely the quaking that causes injuries. It’s more likely that people will be injured by buildings collapsing, objects thrown through the air or braking glass. It is therefore recommended that people find cover as soon as possible when the ground begins to shake.

If there is an earthquake and you’re indoors, here are three things the Government of Canada website recommends you do:

What to do is you are outdoors during an earthquake
If you are outdoors during an earthquake, quickly find an open area away from buildings, trees, electrical lines or anything that could crumble. Once you’re safe, drop and hold on until the shaking stops. If you’re in a vehicle, pull over to a safe place and keep your seatbelt on until the shaking stops.

However, there’s nowhere in Quebec that is safe from earthquakes. Think about the 5.9 magnitude earthquake in 1988 that surprised the entire Saguenay region and was felt across most of the province.

Does my insurance cover me in case of an earthquake?
An earthquake can cause significant damage and, according to the Insurance Bureau of Canada “33% of Quebecers wrongly believe their basic home insurance policy covers them against this risk, whereas only 4% have the appropriate coverage”.

At iA Auto and Home insurance, your home insurance policy covers you for damages caused by fire, smoke or an explosion resulting from an earthquake. However, this insurance protection does not cover damages that may be caused to the structure of your home.

To be covered for this type of damage, you may add the earthquake coverage to your insurance policy.

For more information about this coverage, visit our Earthquake insurance page or speak to one of our insurance agents to find out more.

Additionally, because no one can predict when an earthquake will occur, feel free to educate your family on what to do in case of an earthquake.

Your home is a big investment for you. Whether you own a house or a condo, one of our advisors can help you find the right home insurance for your needs.